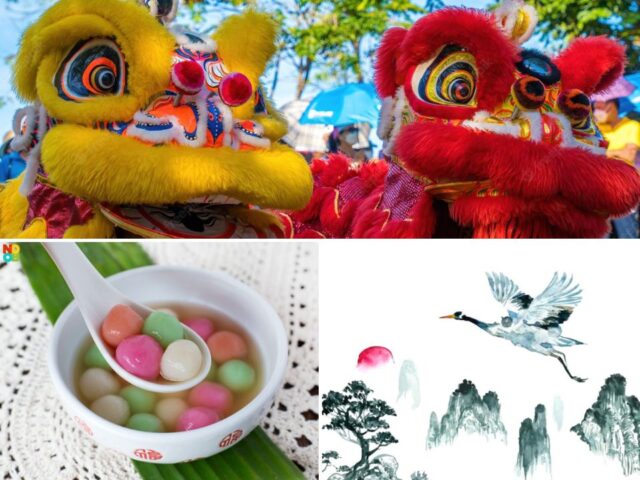 Are you all excited about the upcoming Chinese New Year on 22nd January? We hope you are excited as us. Other than being thrilled to see Chinese New Year mall decorations or receive Angpao from your elders, let’s learn about the enchanting and legendary Chap Goh Mei Festival that will happen on the 5th of February!

Even though Chap Goh Meh is officially known as the Lantern Festival or Yuan Xiao Jie (元宵節 ) in Mandarin but in Malaysia, it is known as Chinese Valentine’s Day. Chap Goh Mei refers to the 15th and last night of the Lunar New Year in the Hokkien dialect – which is the term that is most commonly used among Malaysians.

There are many folklore or legends regarding Chap Goh Mei but the famous legend is involving a beautiful crane.

The Jade Emperor’s favourite beautiful crane flew down to earth from heaven only to be slaughtered by the villagers and he vowed vengeance on the villagers. He sent a storm of fire down on the 15th lunar day, but his daughter, Zhi Nu, warned the villagers of his plan.

They were at a loss for how to avoid the emperor’s wrath until a wise man from a nearby village recommended that every family hang red lanterns around their homes, build bonfires in the streets, and light fireworks on the 14th, 15th, and 16th lunar days.

On the 15th day, the Jade Emperor’s army descended from heaven to incinerate the village but they saw that it was already “ablaze” so left without doing anything and reported it to the Jade Emperor. He was happy with the outcome and the town was saved from the wrath of the Jade Emperor.

Due to this, people now light fireworks and carry lanterns along the street to commemorate the occasion of the 15th lunar day. But in Malaysia, Chap Goh Mei is associated with throwing oranges to find true love.

What You Can Do On Chap Goh Mei

The festival’s most well-known and colourful activity is without a doubt the throwing of mandarin oranges into the water by single ladies.

It is thought that by doing this, they would be successful in finding a suitable partner. Many believe that the act of tossing tangerines into the sea at Chap Goh Meh also represents the women’s readiness for marriage.

Additionally, it is believed that if the floating orange is picked up by someone else after being thrown into the water, the person who tossed it will likely meet a compatible partner.

Tangyuan is a glutinous rice ball commonly filled with red bean, sesame or peanut. But do you know eating tangyuan is one of the most important customs during Chap Goh Mei?

Chap Goh Mei is usually eaten at home or with family members. The Chinese believed that the Tangyuan’s rounded shape signifies family unity and provides harmony, happiness, and good fortune in the upcoming year.

Now you learn everything you need to know about Chap Goh Mei Festival. Enjoy your last day of Chinese New Year with your family, friends and to the single people out there, good luck finding your true love!